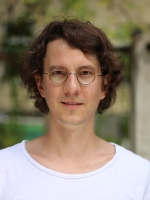 I obtained my Master´s degree (Magister Artium) in philosophy from LMU Munich (Ludwig-Maximilians-Universität). I am currently a Ph.D. student at LMU Munich working on a project on metaethical expressivism under the supervision of Prof. Dr. Dr. Hannes Leitgeb. Both, my master´s thesis ('Hybrid Theories in Metaethics. The rationality and validity of moral reasoning’) and my doctoral thesis, are funded by the German Academic Scholarship Foundation (Studienstiftung des Deutschen Volkes).

My main philosophical interests are in metaethics and philosophy of language. My Ph.D.-project develops a novel form of metaethical expressivism that attempts to overcome the most notorious problems of non-cognitivist theories especially in semantics and logic, but also in the philosophy of mind. The resulting theory will be recognisably expressivist, yet compositional, univocal, unilateral, content-centered, mentalistic, explanatory, and constructive. My broader philosophical interests are in metaphilosophy, metasemantics, ethics, epistemology, normativity, rationality, logic and philosophy of logic.