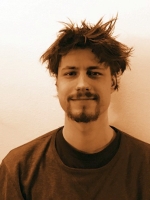 I am a doctoral fellow at the MCMP with affiliation at the Arnold Sommerfeld Center for Theoretical Physics, working under the supervision of Erik Curiel and Daniele Oriti. My doctoral project focusses on spacetime in Quantum Gravity. More in particular, on geometrogenesis and spatiotemporal emergence in group field theory and loop quantum gravity, trying to make sense of the interpretation of General Relativity as the hydrodynamical regime of the underlying quantum gravitational degrees of freedom.

I obtained a master’s in philosophy at the University of Milan, writing a dissertation tiled “On the Notion of Extension. Getting Spacetime from Entanglement in the AdS/CFT conjecture”. Earlier I studied for some time mathematics at the University of Pisa and Logic at the Institute for Logic Language and Computation in Amsterdam. My Bachelor dissertation, in between logic and philosophy of science, was on “Kolmogorov Randomness, Complexity and the Laws of Nature”, aiming at an information-theoretic definition of random phenomena using the tools from Kolmogorov complexity.

(I am convinced that an understanding of the mind, if ever possible, cannot prescind from, and should be combined with, research from the first-person perspective: relying on introspection and delving into the arts).

Other research interests include the formal and unformal design of normative systems, such as games and other types of rule-based (and rule-free!) behaviors. I am interested in virtually all kinds of methods and heuristics to vehiculate thought, analogical thinking and practices of imagination. A recurrent theme of reflection is how formal systems can host creative behaviour in their environment (think for example of what might mean to make an insightful move in the game of Go, but also in less formalized games such as interpreting a musical score). Following these themes, I enjoy inventing all kinds of games and normative systems, from their semantic environment to the rule-machinery. Recently I have been developing some variations of Nomic (a game invented by the philosopher of law Peter Suber, where players are allowed to change the rules as a move), trying to explore its possibilities, no-go scenarios and how they can become part of our lives and research practices, e.g. shaping interaction and communication, or capturing salient aspects of how creativity functions. If what we do and who we are is at least partly defined by the roles we play in the normative environments we live in, intervening on them can even have not only political but identitary if not existential connotates.