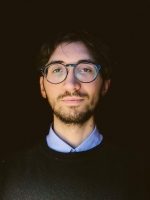 I obtained a B.A. in Philosophy from the University of Bari (Italy) in 2018, an M. A. in Cultural Studies from Goldsmiths, University of London, in 2019, and an M.Sc. in Philosophy of Science from The London School of Economics & Political Science in 2020. Currently, I am a doctoral fellow at the Munich Centre for Mathematical Philosophy at LMU. Here, I work under the supervision of Dr. phil. habil. Alexander Reutlinger and Professor Dr. Stephan Hartmann.

My main philosophical interests are formal social epistemology, mathematical philosophy of science, and decision theory. In virtue of these three interests, I am undertaking a research project aimed at specifying the epistemic role of scientific consensus in accepting results and formulating policies in climate science. I approach this topic by appealing to formal accounts of scientific consensus. Thus, besides being interested in phenomena such as the public trust in scientific expertise and its relations with expert (dis)agreement, I am also concerned with questions regarding the status of agent-based models as a method for investigating social aspects of scientific inquiry.