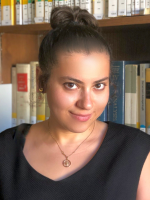 Anita Keshmirian has a bachelor's degree in computer (software) engineering and a master's degree in cognitive science from Iran. She did her second master's degree in neuroscience (double degree, Neurasmus program) in Berlin, Bordeaux, and Boston. Prior to her Ph.D., she did a lab rotation at Harvard University in Fiery Cushman's lab where she worked on her project related to the interaction of intention and consequence in the group moral decisions, at Humboldt-Universität, in Dr. Henrik Walter's lab on the role of introspection, anticipated emotions, and future thinking in self-control in an fMRI study of the insular cortex and finally with Dr. Alex Zenon lab at Bordeaux University on a project related to mutual information-based neuroimaging investigation of perceptual decision making. Anita completed her Ph.D. at the graduate school of systemic neuroscience (GSN) at LMU in 2021, where her doctoral research focused on the cognitive science of group decision-making in social and moral contexts. Currently, Anita is working on Bayesian argumentation using bayesian networks at MCPM.