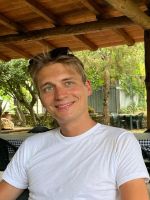 Giorgio's research is mainly in logic and philosophy of language. His current project EvoLogic is about the evolution of logic: how did we develop languages that contain logical operators? Why these operators and not others? The goal is to understand the origins of the human capacity for logical reasoning. Merging philosophical logic and evolutionary linguistics, the general hypothesis is that logic evolved to support social interactions and efficient communication. The particular focus will be on the evolution of quantificational reasoning, which is key to the ability to generalize and to count.