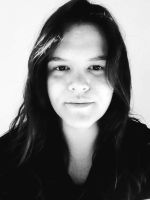 Ana Cholodovskis completed her Bachelors in Philosophy at University of Brasília (UnB) in 2011 and her Masters in Philosophy (concentration area: Logic) at State University of Campinas (UNICAMP) in 2014. The master thesis under the supervision of Prof. Dr. Walter Carnielli intended to justify the importance of a nonmonotonic paraconsistent logic based on Logics of Formal Inconsistency from an intuitive analysis of concepts and notions involved in such formal systems, also considering possible approaches from the so called Adaptive Logics of Inconsistency and Modulated Logics.

Currently, Ana Cholodovskis is a doctoral fellow at the Munich Center of Mathematical Philosophy (MCMP) at LMU Munich. Her research on "Updates with Indexical Information" under the supervision of Prof. Dr. Hannes Leitgeb initially intends to investigate philosophical and formal aspects of adding indexical information considering nonmonotonic systems.