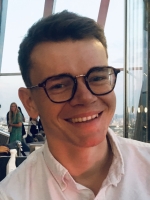 Hey, I’m Alex! I studied Natural Sciences at Durham University, graduating in 2014 with a BSc in Philosophy & Physics. After this, I worked at a digital agency in London, before completing an MA in Philosophy and History of Science at the University of Bristol in 2017. I then spent a couple of years working as a project manager at the Institute of Physics, looking at how best to integrate the findings of physics education research into classroom practice. Currently, I’m a Doctoral Fellow at the MCMP, working with Prof. Stephan Hartmann and Dr. Erik Curiel on foundational problems in general relativity and black hole thermodynamics.

My interests centre on philosophical issues in the foundations of physics. In particular, I'm interested in general relativity and what it tells us about ontology and spacetime, the foundations of black hole thermodynamics, and the use of analogue experimentation in these areas. I'm also interested in the broader philosophy of science, particularly perspectival realism, the problem of old evidence, and theories of prediction and explanation in historical natural science. Sometimes when I’m feeling a little crazy, I like to think about climate change ethics.

My MA thesis, Who’s Afraid of Black Hole Thermodynamics? was highly commended by the panel of the 2017 Hanneke Janssen Memorial Prize.

For my work at the Institute of Physics, I was awarded the UCL EDUCATE EdWard.