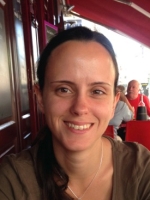 Marianna Antonutti Marfori obtained her PhD from the University of Bristol in 2013 and since then has held positions as a lecturer at Keele University (2013-2014), as a postdoctoral fellow at the Institut d'Histoire et de Philosophie des Sciences et des Techniques in Paris (2014-2016), and as an affiliated lecturer at the University of Salzburg (2016). She joined the MCMP in October 2016 with a Marie Skłodowska-Curie postdoctoral fellowship. From October 2018 she was a DFG postdoctoral fellow on the French-German bilateral project "Formalism, Formalization, Intuition and Understanding in Mathematics", and from June 2021, she was aassistant professor for the Chair of Logic and Philosophy of Language. In October she started her position as Maître de conférences at Université Paris 1, Panthéon Sorbonne.