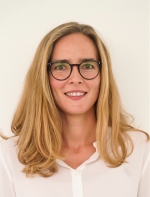 Silvia Jonas holds a Marie Skłodowska Curie Fellowship by the European Commission. She completed her Ph.D. at Humboldt University Berlin in 2012, a BPhil in Philosophy at the University of Oxford (2010), an MLitt in Philosophy at the University of St. Andrews (2008), and a Magister Artium in Political Science, Philosophy, and Religious Studies at Munich University (2007). From 2012 to 2017, she was a Polonsky Postdoctoral Fellow at The Van Leer Institute and a Visiting Researcher and Lecturer at the Hebrew University of Jerusalem; from 2017-2019, she was a Minerva Fellow funded by the Max Planck Society at MCMP.

Silvia Jonas has been selected for the Fast Track Program for Outstanding Women in Science of the Robert Bosch Foundation. She has held a Minerva Fellowship by the Max Planck Society (2017-2019) and was a research fellow in the project Abrahamic Inquiries into Science and Religion, funded by the John Templeton Foundation (2016-2019). She has also been awarded research grants and scholarships by the Konrad Adenauer Foundation, the German Academic Exchange Service DAAD, the Humboldt University of Berlin, the Polonsky Academy, and the Hebrew University.