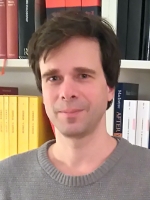 Momme von Sydow studied both Philosophy and Psychology at the Universities of Bonn and Durham (UK) and obtained Doctorates in both disciplines. He completed his PhD in Philosophy at the University of Durham on a topic relevant to Philosophy of Science, Philosophy of Nature, and Epistemology. He obtained his second Doctorate in Cognitive Psychology at the University of Göttingen on issues of hypothesis testing, induction, and checking deontic rules. He raised several third-party funds and in the projects he addressed facets of hypothesis testing, Bayesian logic, logical predication, second-order probabilities, and causality. He continued his work at the University of Heidelberg, at the lab of Leibniz Prize winner and social psychologist Klaus Fiedler. Momme von Sydow has lectured at the University of Durham, University of Göttingen, TU Berlin and University of Heidelberg. In 2015 he began co-ordinating an interdisciplinary mathematical-psychological project on optimal experimental design, funded by the German Excellence Initiative (IWF; Dept. of Psychology, Heidelberg). In October 2015 he was Visiting Senior Research Fellow at the MCMP and visited the MCMP repeatedly. In 2016, he began working as senior research fellow at the MCMP in a project with Ulrike Hahn and Stephan Hartmann.

Momme von Sydow is interested in normative and empirical questions of human individual and collective (ir-)rationality. Aspects of his philosophical-psychological work may be interpreted as being related to his critical assessment of Dawkins’s and Popper’s Darwinian metaphysics. His research addresses the following topics: