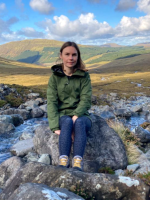 Alice is interested in the imagination in science, and the relations between the philosophy of science and the philosophy of art. Her PhD thesis focused on the nature and role of the imagination in scientific thought experiments, as well as the relations between thought experiments and other practices in science, such as computer simulations and physical experiments. Her current research is on the aesthetics of science, and the ways in which aesthetic value can contribute to scientific understanding.