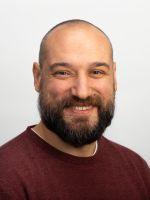 Edi Pavlovic completed his MA in 2012 and his PhD in 2017 at the Central European University (at that time still located in Budapest), both in Philosophy and both focused on non-standard quantification theory of the Quantified argument calculus. He has worked in the project "Modalities and conditionals: Systematic and historical studies" with the PI Sara Negri as a Postdoctoral researcher at the University of Helsinki 2018-2021, investigating logic of agency via the see-to-it-that modalities, as well as epistemic logic, using proof-theoretic methods. In September 2021 he has joined MCMP, where he is primarily focused on investigating the proof-theoretic, as well as philosophical, aspects of free logic in the project "Free logics: Variants, unification, and some applications" with PI Norbert Gratzl.

Edi's interest lies in logic, and especially in all things proof-theoretic, though he will ocassionally find himself intrigued by the philosphical consequences of his proofs. This has led him to be interested in non-classical theories of quantification, and of late especially free logic, as well as a myriad of modalities whose intended interpretations have philosophical heft, like "do," "ought," "believe," and "know."